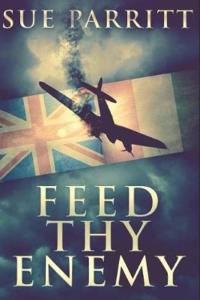 In this heart-warming narrative based on a true story, a British airman embarks on a plan that risks it all to feed a starving, war-stricken family.

Thirty years after serving in World War II, middle-aged Rob’s holiday plans see an unforeseen change that leads him on a coach tour of Italy. Struggling with post-war PTSD and depression, he reluctantly agrees to the journey – and sparks a dream that plunges him into long-stifled memories.

Set in Europe, Sue Parritt’s Feed Thy Enemy is an account of courage and compassion in the face of trauma. When Rob’s flashback delves into his attempts to save a famished family with a series of increasingly daring raids on his army’s supply stores, will he trigger suppressed remembrances of past war, love, and sacrifice – and find the strength to confront them in the present?

Review Feed Thy Enemy by Fany Van Hemelen:
What a sensitively written tale about the struggle with mental problems after war.

Rob is haunted by nightmares and scary nights. The demons of the war give him PTSD. When an unplanned vacation changes by place his wife is thrilled by the beauty of the location. Rob isn’t so happy, in fact he is afraid to be confronted with the locations where the terror happened in the past. Of course it isn’t so easy to heal such a deep scarves so this is a raw and hard story.
The author dives in to the past and present so the book is filled with flashbacks.

Even though this is not a fairytale it is impossible to close the book because I want to see the wounds heal. The trip to get back on with his life is amazing and when I discover this story is based on true facts I even have more respect for the troubled man.

Sue Parritt has written a well-crafted historical novel about post war PTSD. The story is based on the true life and experiences of her dad. He suffered from PTSD and depression after the war and has the courage to overwin his enemies inside.

For people who suffer from this diagnosis this is a heart- warming and recognizable journey and for people like me, it is a good start to get to know more about this mental problems.Who knows how many more people have this feelings after being in a war or another trauma?

Originally from England, Sue worked in university libraries until taking early retirement in 2008 to concentrate on creative writing. Since then she has written short stories, articles, poetry, a short TV drama script and six novels:

Sannah and the Pilgrim, first in a trilogy of a future dystopian Australia focusing on climate change and the harsh treatment of refugees from drowned Pacific islands. Odyssey Books, 2014. Commended in the FAW Christina Stead Award, 2014.

Pia and the Skyman, Odyssey Books, 2016. Commended in the FAW Christina Stead Award, 2016.

Chrysalis, the story of a perceptive girl growing up in a Quaker family in swinging sixties’ Britain. Morning Star Press, 2017

Re-Navigation recounts a life turned upside down when forty-year old Julia journeys from the sanctuary of middle-class Australian suburbia to undertake a retreat at a college located on an isolated Welsh island. Creativia Publishing, 2019.

Feed Thy Enemy, based on her father’s experiences, is an account of courage and compassion in the face of trauma as a British airman embarks on a plan that risks all to feed a starving, war-stricken family. Creativia Publishing, 2019.

Sue’s current project, A Question of Country, is a novel exploring the migrant experience through the protagonist’s lifelong search for meaningful identity.

Passionate about peace and social justice issues, Sue’s goal as a fiction writer is to continue writing novels that address topics such as climate change, the effects of war, the treatment of refugees, feminism and racism. Sue intends to keep on writing for as long as possible, believing the extensive life experiences of older writers can be employed to engage readers of all ages.